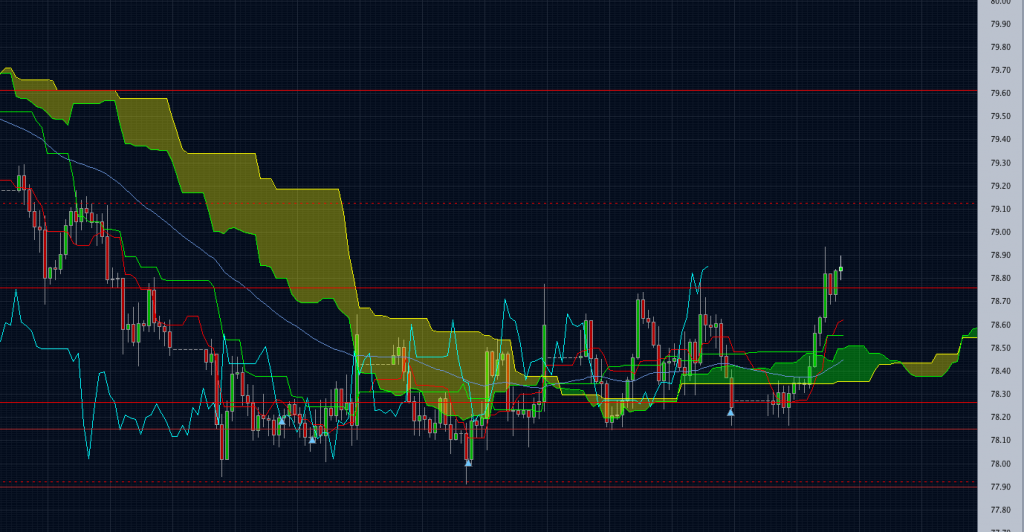 I am now heavily invested into USDJPY. With 4 positions on the pair, I always look out for the nearest resistance to place my stop loss. You don’t want to lose too much when the trend suddenly reverses. Play defensive as one might say.

But it seems pretty good trade so far. I almost got all the bottoms and I’m waiting for the real trend to begin. Capital is up by 17% as of this writing.

By the way, there’s a new forex trading lesson out now. Its worth reading. 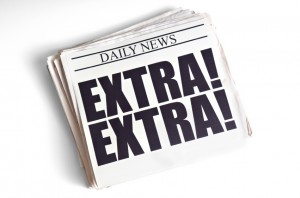 You might have noticed that I don’t post much about the news like other forex blogs. I don’t bother with what the next interest rate would be or the quantitative easing of currencies. I realized that if you depend so much in the news, you’ll end up confused.

Don’t get me wrong, there are a couple of people who trade solely on the news, and its a strategy that I never got the hang of. Its fun to see your account go up the moment the news was released, and provided you’re on the right direction, it can provide so much high. And I think I understand why some people would depend so much on the strategy. Its fun!

But in my experience in messing around with the news as a forex trading strategy, while waiting for the news to come out, like for example, the interest rates. Its hard for an ordinary person to predict what would be the interest rate. Even experts can’t be so accurate to predict it, so that leaves me “guessing” what will be the interest rate. And with time pressure on your side before the news broke out, its just a matter of guessing now. With 50% chance of going wrong, you’ll eventually go break even or go bankrupt. And with stress as its effect, I don’t think I would last much with this strategy.

I don’t know, some people may make a killing out of it, I see a lot of people depending on news for their trading and investing decisions. I see a lot of this in stocks and currencies particularly.

What about you? Do you trade with the news? How was it?

Closed trade on USDJPY giving us with 35% boost in capital. Its a great trade and the reason I closed is because of the strong resistance. Also, there’s a doji that formed this morning. I don’t want to risk the profit if all the indicators are telling me its still uncertain.

As a rule of thumb for me when trading forex, I get out when I am confused. As of this moment, USDJPY is in a confusion as both buyers and sellers don’t know where to go. As proof, a doji formed. I’d rather be on the sidelines or open a position on the sell side since its a lot closer to a resistance line. But that’s just me. 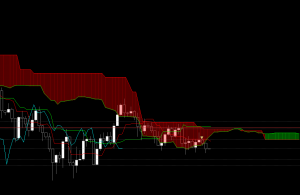 I’ve been following CAD/JPY for a while because I was waiting for the breakout. There was a confirmation of this about to happen in the daily chart. I’m in this trade right now and currently at +61pips.

Why did I choose bear?

The red “cloud” you see on the chart is a resistance. The reversal pattern and the cloud plus the green and red line all indicates a bearish flag. This is a high probability trade and we may see some consolidation tomorrow by making a new low then pulling back, then breaking all the way down. If you’re going to get in this trade now, just make sure to put your stop loss.

From my very good trade on EURCHF and achieving my First Forex Goal, came the reward, an iPad 2.

I just got it this morning, just after I woke up. 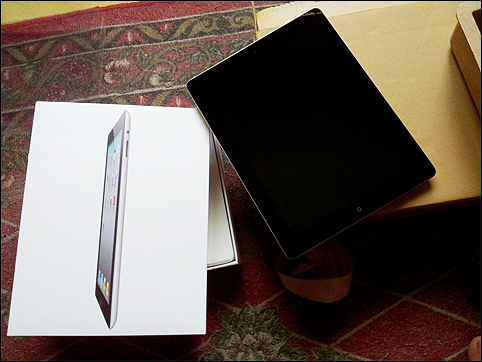 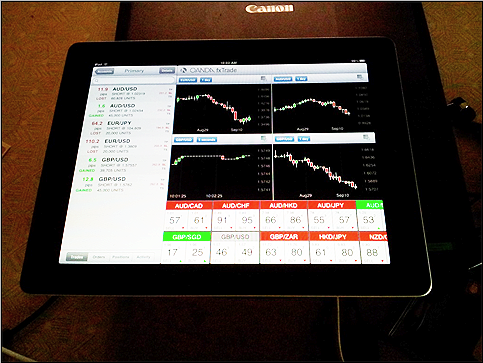 A very handy tool for forex trading. I can trade virtually on any position while lying on the couch.

I personally think that the EURUSD and GBPJPY’s uptrend is one big bluff. Look at what happened when the news went out for EURO. The situation there is terrible. Just one news and down it goes for more than 200 pips in a few hours. I think the GBP will be next. Will it go up? Sure, but I think it is short lived and just a bluff. 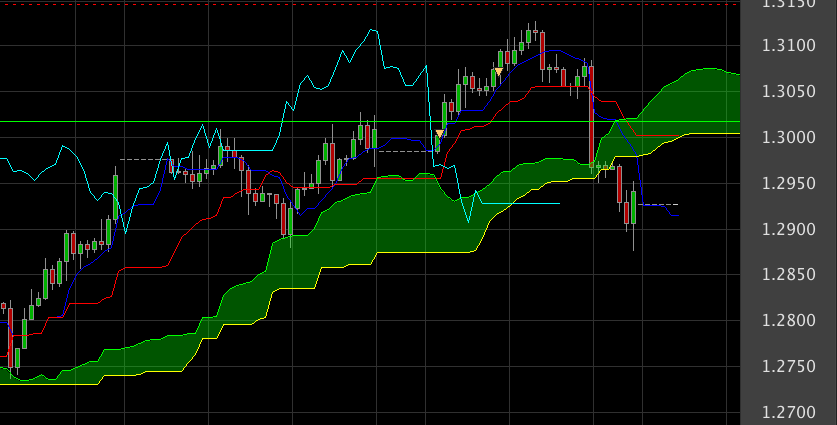 I’ll still continue to wait for GBPJPY or find ways to add position on EURUSD. I think the short term traders may have made the pairs too overbought. But its a good opportunity for most of us to make money out of it.

EURCHF is playing hard to get and is still consolidating. We might still have more consolidation for the next week. But if you are in this trade in LONG Position and it did move up, expect a great reward from this. After all, our stop loss is just at 1.200 which have a low risk with great rewards. On previous post, if you have entered the trade, you have around 10 – 12 pips of stop loss and we are looking at our first target if this breaks out at 120 – 150 pips. That’s x10 reward right there as our first target. We are actually buying at bottoms here.

Its time to test those patience. EUR/USD is looking very good on the short side though. But I wouldn’t enter personally at this time.. The stop loss would be too much of a risk for me. I’d like to be on top, being a contrarian trader. EUR/CHF is a better pair for us to trade at the moment.

While in consolidation, protect your money. You don’t want to lose money at this time because after consolidation you know what happen… A breakout. You want to be on the sidelines or hold any position so you can survive the whip saw of the price until you earn a payday on the breakout. Its time to practice patience guys.

Of course, all this is for educational purposes only. Trade at your own risk. 🙂 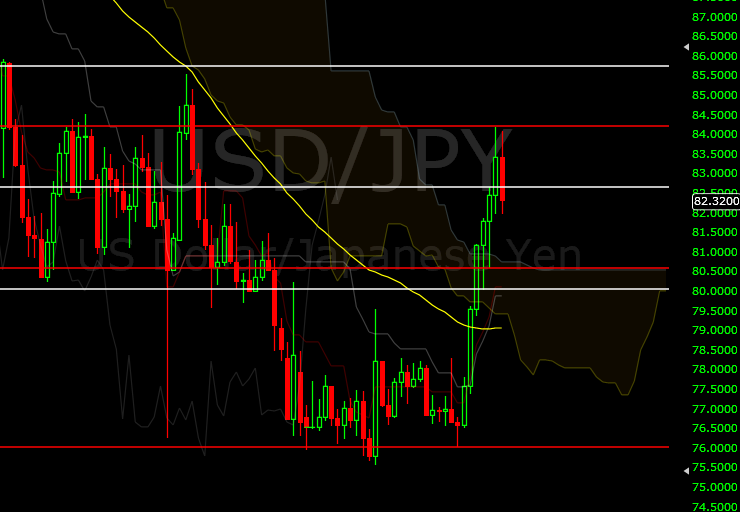 Seems like USD/JPY is forming a pullback from the past week of bull run. Looking for the red lines as support/resistance and targets. 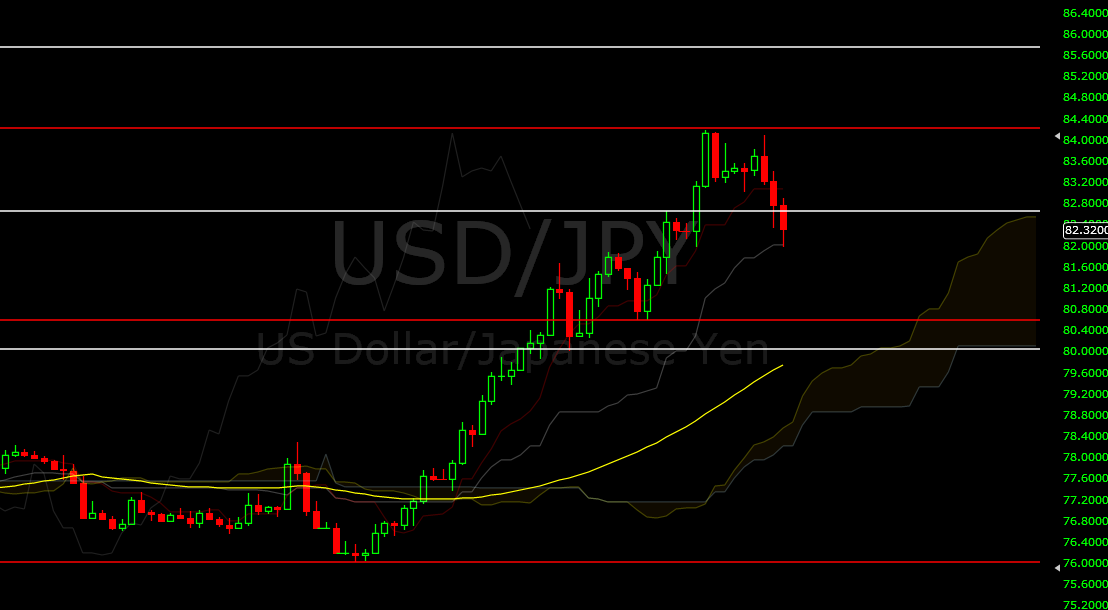 I’m currently SHORT on USD/JPY and is already 14% up in green. Red lines are strong resistances/support. Could take a couple of more days before we hit our target 80.600. 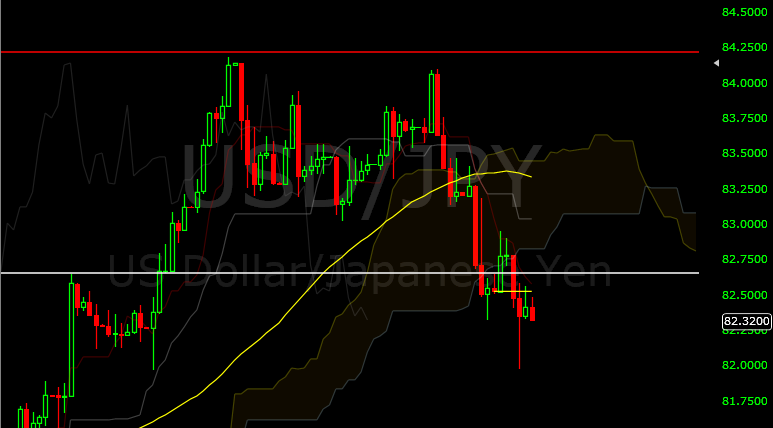 Comments on other Pairs

I’m currently on the sidelines for the other pairs. My watchlist includes, AUD/CAD, EUR/USD, EUR/CHF. Though, they made a clear price action before, the chart, for me, is not very favorable now and I would prefer to wait until a more clear price action appears. In the meantime, I’ll focus my forex trading on USD/JPY.

I closed my position on USDJPY with an increase in my war funds of 48%. Right now, I took an opposite position to the SHORT side. 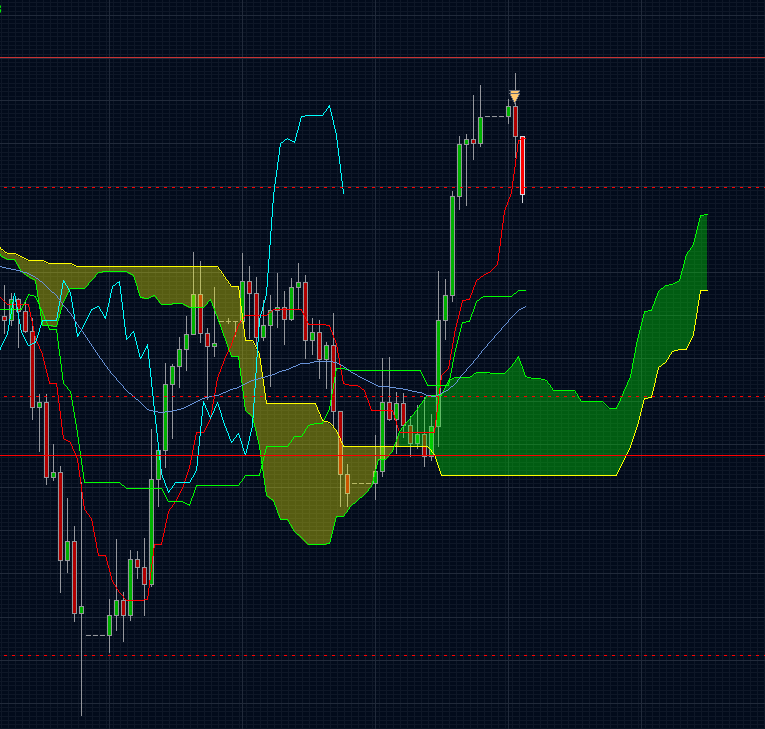 I’ve been reading some beginner stuff about forex trading and one thing that caught my attention is that many experienced trader always advice not to trade on mondays. The reason behind this is because you want to know what will be the starting setup for the coming week so letting the first days alone is crucial. It also has the less volatility when it comes to pip movement.

I don’t know… Since I started trading, I’m never been more excited about mondays. When I was still in a full time job, I despise mondays! But now, I’m excited and I can’t even sleep sometimes.

What do you think? Do you trade mondays?